India is a vast country where majority of the population lives in tier 3 and tier 4 cities. Annual report published on jan 16 2018 by  Aser Center states that percentage of students above 18 years going to school showed 70% increase in 2016 as compared to 25% in 2001 which clearly denotes upwards growth. The interest in rural areas to seek education has been growing in past. The data has been taken from survey conducted on 30000 youths ( 14-18 years)of 1,641 villages of 24 states in India.*
* Source: www.livemint.com/Opinion/1km3nIazOPD0JgDwqKjz8J/The-state-of-education-in-rural-India.html

But these masses fail to achieve higher goals in life due to lack of connection or awareness. These masses fail to seek right information and generally cannot grow in career. NSSO states that the literacy rate in urban areas(86%) was much higher than rural areas(71%) in 2014.Factors which have resulted in such findings include poor infrastructure, lack of teachers and content.****source:http://bwdisrupt.businessworld.in/article/Future-of-Rural-Prosperity-India-in-2050/20-04-2017-116691/
Mostly top colleges are situated in major cities. Tier 3 and Tier 4 cities have less colleges. 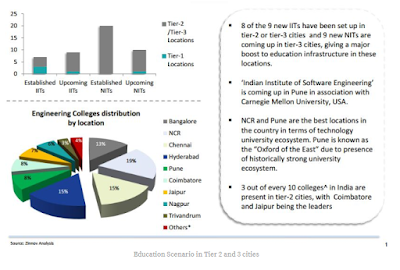 Major problems faced by Tier 3 and Tier 4 students
EFOS serves as a platform where Indian Youth to can connect to Verified Opportunities for career planning, development and progression. Connect info@efos.in to know more.